The Graphic Knowledge in Patterns, Shades and Patterned Objects

As the here annexed images show, a transition from mere graphical patterns to the complete object appears to exist, via an array of properties that refer to such elements as light, context, pattering, practice, co-constitution of meaning etc. This is to say that from the graphically reduced pattern of objects one cannot directly infer its meaning or role in a graphical, let alone social context. In the first of the pictures enclosed we see a pattern of boxes neatly stacked with a cordon of boxes at the top, seemingly limiting the extension of the otherwise indistinct mass of rectangles. With a bit of imagination, one could infer its meaning, or its form that is clarified in the following fotos.

What really helps us make sense of its meaning are the shades that are applied in the next picture. These help us discern a sort of order, a relation that is instigated by the function of light (or an imagined source of light influencing graphic description) that allows for distinguishing some parts from the others, seeing which are on top, which on bottom and how the overall structure refers to the elements of its whole. The relationality in the depiction is brought upon by the graphic production of light as a means of structuring a picture, function of its natural dispersion on surfaces that is applied to the drawing, first as a graphic structure, but then as a matrix of sensemaking that affords the differentiation and integration of objects in their mutual relation to each other. Thus, the application of the lighting matrix opens up our gaze for the production of knowledge. The two are clearly related to each other, as the one refers to the other and incites, yet enables a comparison to real-world objects that lets us judge its potential use, its position in the real world and practices that are bound to it.

The third picture, finally, introduces a darker tone, a somber saturation of shadows that renders the object more life-like, more graphic and one could say ‘real’. Also, some liquid, one might say water, drips from the lower seams of the object agglomeration, which can now be discerned as tiles that form a roof – a roof that nevertheless does not follow the traditional patterns of ‘form-making’, but is bundled in one circular assemblage, with the characteristic top seam of tiles on top – the one we know from Comics and Mangas, to Disney movies and Anime series. Not only has the nature, and un-nature, of the object now been clarified by the existence and application of the luminous matrix, discerning and relating objects to each other, also we have another element elucidating our vision: water. But nor entirely, as it is unclear where it comes from, and where is goes. Its only role appears to be to encompass the object and, in its relation to the amassed tiles, fulfil its relational role: To virtually run down the tiles and drip down at the lower end, giving direction, orientation and use to the formally only formalized representation of a pile of tiles. The water is the second sense-making matrix, it makes the logic matrix of tiles accessible to sense-making, via two depicted graphic devices.

What does this finally implicate? There is a relationality of graphically reproduced objects that opens up our field of vision towards the possibilities of knowledge production. Only in mutual relation of the objects to each other can we fully grasp their role, their potential context and their entire meaning. Only in relation to multiple matrices of sense-making can we produce and extrapolate potential structures of sense-making that transcend the pictured details. Where might this pile of tiles exist? Where does it rest? Is it ‘possible’? Who might own or need such a thing? And what can be ‘done’ with it? It is a geography of possibilities and impossibilities that is bound to the object itself and to a possible multiplicity of other objects in potential relation to it – one of it being rain running down the tiles. Another being people assembling, using, destroying it. These geographies of possibilities are not only tied to matrices of sense-making (light reflecting, order of objects, rain running down), but also to our experience and the inference of knowledge ultimately derived from the real world. It is in comparison to the real world we might access the pictures’ meaning, via the depicted forms, elements and relations, and conclude on its possible meanings.

This is a very simple example of sense-making related to drawing and graphic description, but one that, referring to Nelson Goodman or Paul Feyerabend, holds great potential for its use in scientific, but also in everyday contexts. Also, it shows the revolutionary potential of graphic forms of knowledge production – one, whose real potential we experience mostly unwittingly, and therefore lends itself for thorough analysis and discussion. 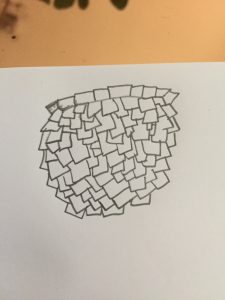 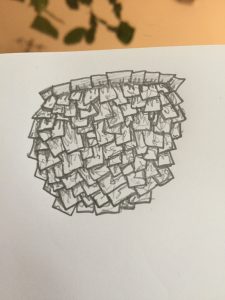 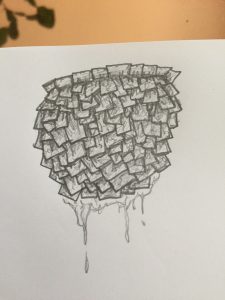